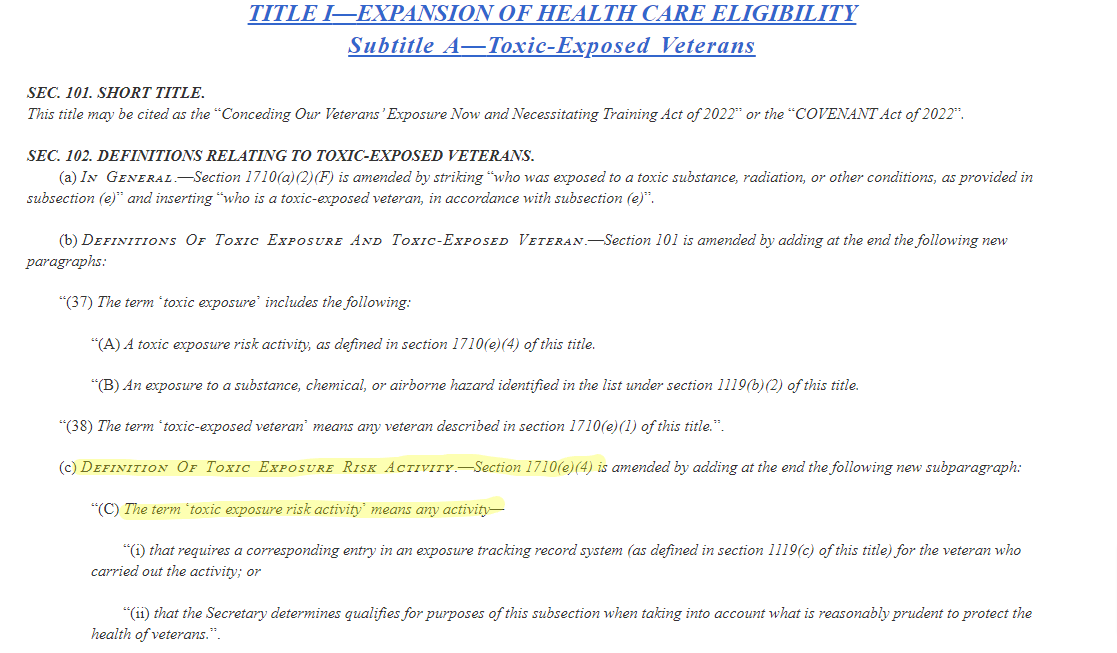 This is a LONG thread. Feel free to link to it in any discussions of the #PACTAct or the GOP's betrayal of our vets, because here's the TL;DR: There's no "slush fund" in the bill, just paying for the care it mandates. And there's nothing unrelated to vet health in the bill.

The GOP is lying to their constituents, because they know their voters won't want to believe that the God-and-Country GOP just fucked over our veterans. So if you come across someone like that, point them here, and ask them to find the slush fund or pork in this bill.

OK, folks. Republicans are insisting they voted against funding Veterans' healthcare last week because there was a secret 400M "slush fund" in the bill (that they somehow missed when they voted for it weeks earlier). So let's just read the bill.

You can find it here. https://www.congress.gov/bill/117th-congress/house-bill/3967/text. I'm skipping the amendment to the short title ("This bill can be referred to as …") and the table of contents

Start with sections 101 and 102. 101 is literally the "Short Title" and tells you how you can refer to the bill; it was amended from the "COVENANT ACT" to the "PACT ACT" in that amendment I skipped.

The first change is to 1710(a)(2)(F). As you can see, the government MUST provide hospital care to veterans who qualify under (a)(2)(F). They've replaced the old language "who was exposed to [various toxins]" with "who is a toxic-exposed veteran"

Looks like a small, semantic change, right? Don't think so (this is my first time tracking these changes through, so I hope I'm reading this right).

Here's the point of this bill. As of now, a vet looking to claim benefits under this section has a burden to prove they are

suffering specifically due to their toxic exposure during service. That is, they need to be able to trace their cancer or other illness to a specific toxic exposure.

As you can imagine, that's almost impossible

This bill is intended to replace that system with a simple rule: If you were exposed to burn pits (and thereby various toxins) the government covers your care. Period. "toxic-exposed veteran" is a status, and I assume that's how they accomplish that goal.

So what's a "toxic-exposed veteran"? That's what the next set of definitions tells us – anyone listed in 1710(e)(1), and man is that a metric fuckton of volunteers we exposed to some horrible shit in a variety of terrible ways

Last (in this first set of provisions) the bill expands the definition of "toxic exposure risk activity" with some technical gobbledygook that I don't have the time to understand, but pretty clearly covers burn pits.

OK, on to the next section – which basically adds "served in operations where burn pits were used" to the list of "toxic-exposed veterans" under 1710(e)(1)

Next we have some provisions delineating the covered time periods; I'm not going to review them in detail because they don't matter to the purpose of the thread, but I'm not going to skip them because I promised screenshots of the entire text. So here it is.

Next, the Bill instructs the Secretary (of Veterans Affairs, I assume but am not checking because it's irrelevant) to come up with a plan to make sure veterans know about these benefits

Next, Congress instructs the Secretary (of VA, yep) to figure out whether they have what they need to actually make this happen, and report back. And then annual reports from 2025-2033

Next we have a provision that expands the coverage universe and eligibility. It's probably worth understanding what that does if you're looking to advise a vet, but since we're just looking for a slush fund, I'll just note the expansion exists

Next there's a process by which the Secretary, after a notice-and-comment period, can establish presumptions that particular categories of vets were toxic-exposed. Basically, a procedure for updating the eligible categories as toxic exposures occur moving forward

A whole lot of detail is given on how this process must work.

No, seriously, a lot of detail here, including "how do we communicate this stuff to our vets"

And "what if things change, what happens then?"

Still no slush fund, though

Next: "How do we show a service connection" and "yeah, burn pits are definitely connected to illness, cover that shit" – basically, you're presumed exposed unless the VA can prove that you weren't

Also, if there hasn't been a medical nexus established between the illness and toxic exposure, the VA has to provide an examination to see if there is one

Next we have other presumed "yeah, we fucked you up with this we're sorry" service types

Look, for those of you used to fun, meme-heavy breakdowns of legal shenanigans, I'm sorry.

Whether you like how the armed forces get used or not, we're talking about people who volunteered to serve, and are suffering for it. Nothing fun about that at all.

This isn't anything to joke about. We owe every volunteer better than this. If you get hurt serving the country, the country should be taking care of you. Whatever it takes.

That this shit is getting tripped up in politicking pisses me off. Should piss you off too.

Next we have some changes to a compensation scheme. Could this be our elusive slush fund?!

No. It just says "we're going to stop time-gating illnesses; if you end up with one of these conditions and served in the Persian Gulf, we'll presume it's connected. Full stop"

Next we have sections on research and reporting.

A whole bunch on this.

Again, they want fulsome research and reports on how our veterans are doing

Here's a section on "improvement of resources" – could this be our slush fund?

Nope. Literally "publish a list of resources that vets can rely on" and "train people"

Next we get to "Resourcing" – the dollars and cents. So lets see what we have

So, this says that there's going to be a "Cost of War Toxic Exposures Fund" added to Title 38 (Section 3 currently stops at 323) and that the Secretary can use it to pay for needed infrastructure. Let's see what 805 says

Jumping ahead to 805: It sets up a new fund to cover these programs, and appropriates for it new funding, over and above the VA's 2021 funding level, needed to implement these programs.

Basically, what this says is this: This is a new program, and we're going to pay for it with new money, not try to make the VA cut elsewhere to make this happen. That new money is mandatory, not discretionary spending

And for this year, they budget 500M, but provide that the Secretary can't spend any of it without committee approval of specific plans and expenses

So look, this pretty much has to be the "slush fund" they're referring to – it's just a provision that says "yes, we're actually going to pay for the obligations we're taking on"

OK, let's chill for a sec and go back to Title VII, because maybe it's something else.

What can the Secretary spend money on, in addition to paying for care? Modernizing the VA claims system. The bill also appropriates funds for facilities, but that's a separate pile of cash

Some more provisions on facilities leases

And more on leasing

And then appropriations for the VA's major facilities leases

And that's it for "Resourcing". So yeah, we found the supposed "slush fund" the GOP is trying to use as an excuse for torpedoing taking care of our veterans: "But this bill would pay for doing that with new money, instead of stealing from a different part of the VA budget"

For completeness, the rest of the bill: first, various recordkeeping matters

Next, allowing vets injured by apparently toxic water at Camp LeJeune to sue for their injuries, followed by the "Cost of War Toxic Exposure Fund" we already covered

Last we have the final Title of this bill – Title 9, focusing on the VA's workforce: rural hiring, including by buying out existing contracts with other employers,

More on that, pay limitations, bonuses, and recruitment

And more on recruitment.

You've now seen the entirety of the PACT act.

Is there ANYTHING in there that's not relating to veteran health care, that's pork? No.

Is there ANY "slush fund"? No.

Bottom line, the GOP *defense* of torpedoing veterans' health care is "look, we're all in favor of taking care of our vets, unless we have to pay for it"

But the truth also is that they were FINE with paying for it until Manchin swung his deal on reconciliation.

Suddenly, once that happened and without any warning, they changed their minds.

Because to them, a wounded vet is a political toy. No more, no less.